After a hiatus of almost two years now, Parliament is starting to open its door to visitors. In the 2021 monsoon sessions, the Parliament imposed strict restrictions on the entry and movement of any visitors keeping in mind the security of the members of the House Vice President of India and chairman of the Upper House in Parliament Jagdeep Dhankar told the Rajya Sabha on Tuesday that the House was devising a mechanism to involve keen school and college students, who want to attend and share their views on the Parliamentary proceedings.

“I have got requests from several educational institutions stating students are volunteering and wish to attend proceedings of the House. I would greatly appreciate that,” Dhankar said, adding, “…when we have professors and experienced people speaking here, it would be a great idea to have their students also in the gallery.”

VP Dhankhar further said that the House was also looking for a way so that the students who were a part of the proceedings could share their experiences on Sansad TV.

Complementing Dhankhar for involving young minds to witness parliamentary debates, Communist Party of India (Marxist) John Brittas said, “At least it will give us the option to make sure that a section of the country gets to know what is happening in the House.”

After a hiatus of almost two years now, Parliament is starting to open its door to visitors. In the 2021 monsoon sessions, the Parliament imposed strict restrictions on the entry and movement of any visitors keeping in mind the security of the members of the House.

In fact, in December 2021 the winter session of Parliament was cancelled and was clubbed in with the budget session of 2022.

The public gallery where one could watch the proceedings of the House were also closed and even the MPs were made to sit in the galleries meant for visitors adhering to COVID protocols.

The sitting arrangement of members of Lok Sabha and Rajya Sabha was also changed and was made in a staggered manner in the chamber and the galleries of the Parliament.

This however was changed back to ‘normal seating’ in March 2022 during the budget sessions and continued till the 2022 monsoon Parliament sessions while all other restrictions were still in place.

Even the media was not allowed to enter the Parliament building and a dedicated space was allotted to them for interaction with the MPs.

Swastik Vasu is born and brought up in Jaipur, Rajasthan. He is Content Writer in tech, entertainment and sports. He has experience in digital Platforms from 3 years. He has obtained the degree of Bachelor of Journalism and Mass Communication in 2018 from CCS University of Rajasthan Jaipur . official email :-SwastikVasu@khabarindiatak.com , Author at Khabar India Tak. Our enthusiasm for writing never stops Phone : +918386088181 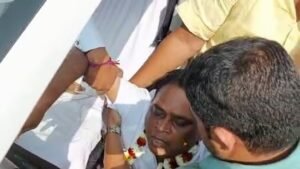